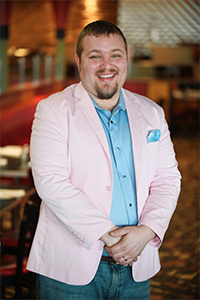 Ryan Kolsky is the general manager at Cap City Fine Diner and Bar in Gahanna. He first joined the Cameron Mitchell Restaurants (CMR) team as a server at that location in 2012. After taking some time away to help friends with the opening of another restaurant, Kolsky returned to Cap City Gahanna and became the lead trainer and eventually the beverage manager before being promoted to his current position.

Originally from Zanesville, Ohio, Kolsky attests his interest in the food industry to the Food Network chefs he admired as a teenager including Emiril Lagasse and Mario Batali. During high school, Kolsky attended Eastland Career Center as part of the culinary arts program where he fell in love with the kitchen. He began his career in the restaurant industry at Max & Erma’s where he gained experience as a line cook, server and bartender, and then joined the corporate team as a lead trainer on store openings.

Kolsky enjoys working for CMR because the company taught him to love hospitality. One of his mentors once told him, “service is given, hospitality is felt,” and he truly feels that every day at CMR.

When asked his advice for others interested in a career in restaurants and hospitality, Kolsky said, “Read Kitchen Confidential by Anthony Bourdain. If you get done reading that book and still want to work in a restaurant, you’ll know. Challenge yourself to learn something new every day, and always communicate with your team. This is a very demanding industry to work in but is by far the most rewarding.”

Kolsky holds a degree in U.S. History from The Ohio State University. He currently resides in Gahanna with his son, Nico, and their dog Gamora. Outside of work, he enjoys supporting the Cleveland Indians, reading up on American political history and watching Law & Order SVU marathons.