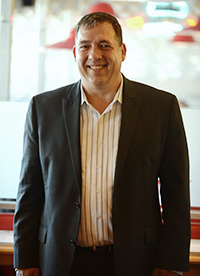 Entering his 16th year with Cameron Mitchell Restaurants (CMR), David Moeser believes in the culture CMR has invested in instilling to each associate.

Moeser began his CMR career in 1999 and has worked in several concepts, including Mitchell’s Ocean Club, Martini Modern Italian and Cap City Fine Diner and Bar. He has held many positions, including server, dining room manager, and assistant general manager before his current role as general manager at Cap City in Grandview.

The most important lesson Moeser has learned in his career is, “The fault is not nearly as important as the progress.” His favorite dish is Cap City’s pecan crusted pork chops.

Before beginning his career in the hospitality industry, Moeser received a degree in landscape architecture from The Ohio State University.

Moeser enjoys football and soccer, as well as watching his daughter, Reese, compete in sports. Moeser, his wife Lola and their daughter reside in Upper Arlington.